Land prices have skyrocketed despite the Covid-19, which has forced many people to tighten their purse strings.

1. Land prices in Thu Duc and Phu Quoc have skyrocketed following the announcement of the establishment of Thu Duc town by merging districts 2, 9 and Thu Duc into HCM town and town of Phu Quoc in KienGiang province.

In one year, land prices in Districts 2, 9 and Thu Duc have increased by 20 to 40%. In the Truong Tho district, designed to become the central area of ​​Thu Duc town, land traded at VND 120 million per square meter.

2. At the end of February 2021, investors from all over the country flocked to the communes of Hon Quan district in Binh Phuoc to seek to purchase land, which became more expensive thanks to the announcement of the development of an airport for use. common on the existing. Tecnic Hon Quan military airport.

The towns of An Khuong and Tan Loi were the hottest markets, where agricultural land was increasing sharply day by day. The price hike brought in billions of dong overnight to surf investors. 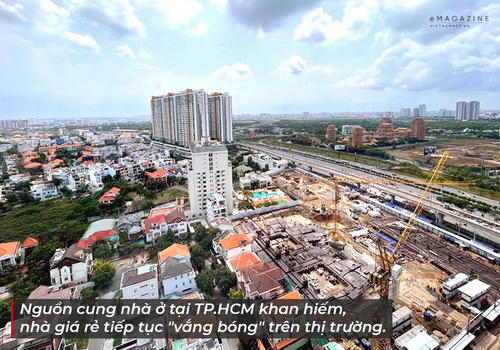 Local authorities then issued a warning to investors about escalating local land prices, stressing that there was no official information about the airport.

A month later, Thien Nghiep commune in Phan Thiet town in Binh Thuan province became a “hot spot” for land deals with information on the construction of Phan Thiet airport.

The construction of the common-use airport, covering an area of ​​543 hectares in the commune of Thien Nghiep, was initially scheduled to start in 2015 and end in 2018. The project did not start, but the local real estate market is chaotic every time there is news on the construction.

Indeed, the collection of tax on rental activities of apartments and businesses has been legalized, but the legal framework still needs to be perfected.

Landlords renting apartments and shops with a total income of VND 100 million per month or more must pay 5% personal income tax and 5% VAT.

4. Supply in HCMC was insufficient in 2021, especially for affordable housing products. In the first half of the year, only 14 projects (11,948 housing units) fulfilled the conditions for the sale of “housing to be formed in the future”.

High-end home products still represented a significant portion of the total offering, with 7,040 products. During this time, there was no supply of affordable products (below VND 20 million per square meter).

In the third quarter of the year, the HCM City market became even more gloomy with only two projects for sale online. The supply of housing has fallen to its lowest point in the past three years, with just 1,600 apartments.

5. Delays in granting the so hong (pink book), or certificate of house ownership and residential land use rights, have been a hot issue for years.

The HCM city authorities have called on the Ministry of Natural Resources and Environment and the Ministry of Construction to join forces to speed up the granting of pink books.

6. A report by the Fiin group revealed that 430 trillion VND of corporate bonds were issued on the primary market in the first 9 months of the year, 27% more than in the same period l ‘last year. Of this total, real estate bonds represented 40% (172 trillion VND).

Alibaba has “manufactured” 58 real estate projects and signed contracts for the transfer of “virtual” products.

8. Allocations of land for sale have taken place in Lam Dong since 2020, but only started to gain attention in the second half of 2021.

Plots ranging in size from several to several dozen hectares have been subdivided for sale into smaller plots. It was land owned by households and individuals, but it was labeled by real estate agencies as resort projects and loudly advertised.

Police have discovered violations in some cases of allocating land for sale under the guise of donating land to build roads.

9. The Lam Dong market has attracted the attention of major players. Provincial authorities have often published information on areas funded by companies for planning, revealing land plans for a number of “big” real estate, such as VinGroup, Hung Thinh Land and Novaland.

Prime Minister Pham Minh Chinh tasked the Ministry of Finance (MOF) to study and design certain types of taxes related to the real estate market, including property tax, in order to stabilize the market and reduce speculation.

Real estate prices continue to rise despite the Covid-19. Some apartments saw their prices climb by 500 million VND over a period of several months.